The Evolution of Tango Dress Code

We are reporting an interesting article on the historical phases of  “Tango Dress Code” from www.dancefacts.net:

While tango was originally born as the music of the underprivileged in the working-class districts of the Buenos Aires in Argentina and Montevideo in Uruguay, in the early years of the 20th century this musical and dancing style managed to reach Argentinian upper class, which quickly disseminated this unique dance to the entire world. They managed to achieve this feat by promoting it first in the fashion centers of the world such as Paris, London and New York. There, tango became the couple dance that everyone wanted to learn. In the year of 1913, the tango became a worldwide phenomenon. Europe was especially enchanted with it, with new fashion styles emerging that helped youth to break the chains of Victorian fashion and embrace new clothing paradigms. That year tango was danced in Tango Teas at the Waldorf Hotel in London, new fashion styles emerged from Tes Dansants in Paris, and the grand Tango ball held in Selfridges department store in the United States was later recalled as one of the largest fashion events of the season. In 1913, first proper “tango dresses” (known as “Tango Visite”) started being made and promoted. They were light, colorful, and featured loose transparent bodice and skirt that was shortened to the mid-calf.

Tango was danced by many, but it was also attacked by many who did not approve of its extravagant fashions of clothing. Tango arrived just in time when the Victorian “restrictive” fashion style was moving away from popularity, most notably female items such as hooped skirts and tight corsets. Historians have recorded that Parisian women gladly stopped wearing corsets so that they could freely dance the tango (although for many years, female tango dances performed to wear a slimmed-down version of the corset that allowed them to perform many tango dance moves). These changes fueled the negative voices, who described tango dance, tango music and most loudly, tango fashion as too revealing, vulgar and indecent. But of course, fashion styles and social circumstances changed, enabling tango to become embraced all around the world.

Faison of tango dance attire can easily change with times
Other parts of female Victorian fashion quickly followed the fate of corsets. For example, before the arrival of tango females preferred to wear elaborate hats with large brims and decorations that flowed away from the hat (such as large feathers) and sweeping across the front of the face of the wearer. While these hats were beautiful, they were an obstacle to the dance, and the fashion quickly changed, allowing women to wear vertical hats that allowed for close embrace during tango dance. Dresses also changed significantly, with more open skirts becoming more favorable, especially those who have more opened front sections which allowed for easier dancing.

Tango mania of early 20th century touched almost every part of fashion clothing, including shoes, stocking, dresses, hats and everything else. For many years, the official color of tango dance clothing was orange, which is a theme that managed several times to come and go away from fashion to this day. Today, one of the most popular colors for female tango dresses is red, while men’s clothing is black or white.

Tango is a sensual and passionate dance, and the woman’s clothes reflect this. Women’s clothes should always strive to be elegant. In its most basic form, female tango clothing needs to be light, comfortable and to provide easy movement that includes intertwining of feet of both dancers.

Tango Dress And Shoes
The most important part of the apparel on women dancers is, of course, the type of dress, which first needs to be comfortable, and then it needs also to be able to provide a proper amount of movement that the dancer desires. Traditionally, early tango dresses were long, but over time they become shorter. Today, women tango dancers can even pick very short dresses and skirts.

Women tango dancers should be sensual, but with clothes that allow freedom of movement
One of the primary element of every tango dress is elegance. Women can often pick tango dresses to serve a dual purpose – to be used for dancing, and to be worn when going to parties and social events. Majority of traditional tango dresses can fulfill both those needs.

The dress material is also very important, with best dresses being the ones that do not elevate heat levels during a dance, and which are soft and loose enough not to cause skin issues. 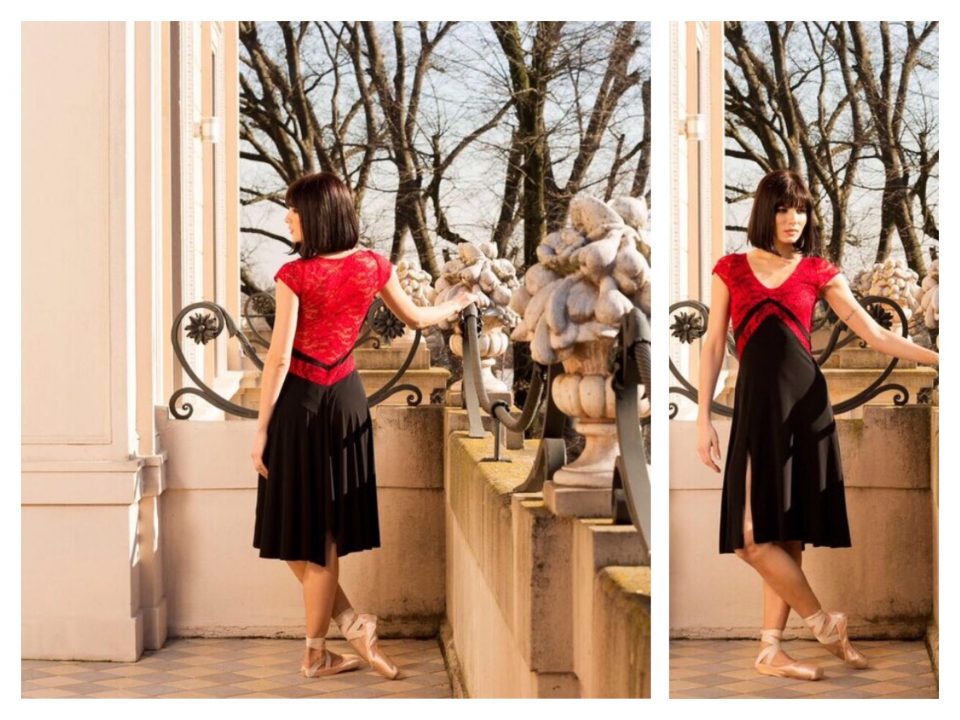 The V Tango dress in black jersey and red lace 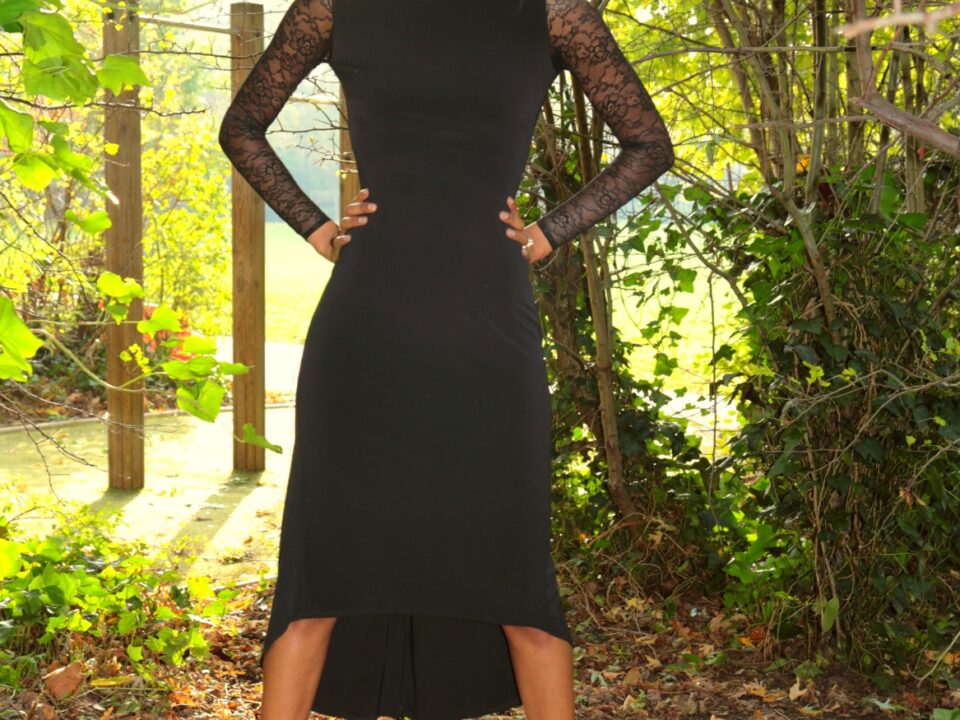 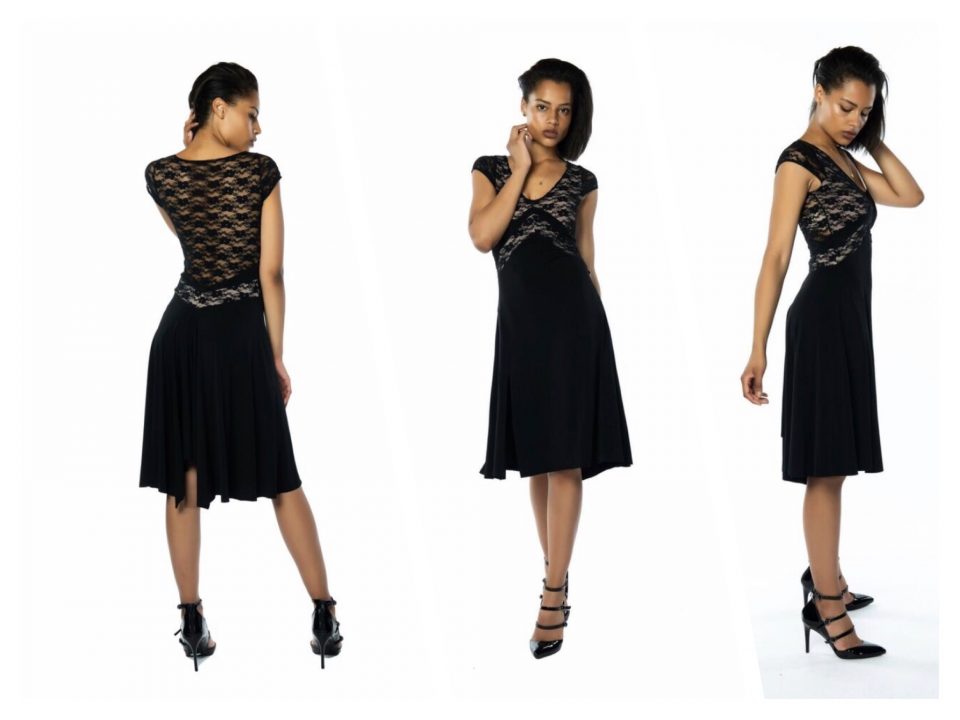 To be measured at the narrowest part of the waist

To be measured at the fullest part of the hips

Please check our size chart before ordering as our sizes may differ from high street brands sizes. If in doubt go a size up or email us for advice after placing the order to info@thelondontangoboutique.com.
In case of substantial measurement deviation vs our size chart, please select tab custom made option and email us your measurements .